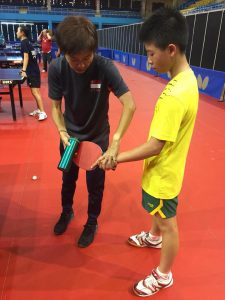 Australia’s Nicholas Lum has been finding his feet in Suva as Team Hopes attended a training camp in Fiji’s capital in preparation for the 2017 ITTF World Cadet Challenge (WCC).

Nicholas was selected for the World Hopes Team after his performance at the 2017 ITTF World Hopes Week & Challenge in Luxembourg back in August, where he was able to pick up a bronze medal.

It’s been a positive experience for the young Aussie, bonding with his new teammates as they each sweated out the sessions together in Vodafone Arena.

“I enjoyed training with my teammates during the week. It was tough training in hot conditions, playing five hours most days. I’m looking forward to competing at the World Cadet Challenge and I feel the experience will help me improve.” – Nicholas Lum

Here with Nicholas is Benjamin Taylor, who is here to help coach and assist his player as he prepares, but also to improve his own knowledge base.

“We have to created a really good team atomsphere with all the hopes kids which I think will be beneficial for competition next week. I’ve learnt a lot over the last week at the training camp, and I think it will benefit me when I go back to Australia.” – Benjamin Taylor

The official WCC training camp will get underway this Saturday 21st October before the tournament kicks off on Tuesday 24th October. 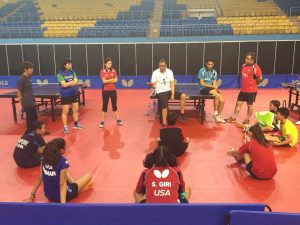