Invitation to umpire at 2018 ITTF-Oceania Championships 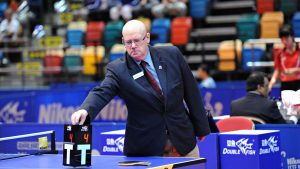 Only nominations approved and submitted by the National Association will be considered.

The event will be seeking a maximum of 20 umpires and therefore not all nominated umpires may be accepted. Only nominations submitted by the deadline will be considered.

ITTF-Oceania will provide accommodation, on a shared basis, from dinner on Wednesday 14th March through to breakfast on Tuesday 20th March 2018, as well as transport from and to Coolangatta Airport.

All invited umpires must organise their own transportation (air – overseas & interstate umpires or car – local umpires) to Gold Coast as well as travel and medical insurance.

Daily allowance in accordance with the guidelines stipulated by the International Table Tennis Federation will be paid to each invited umpire. This will be paid on the arrival day.

The names of those Umpires approved for the event will be notified by no later than Thursday 15th February.