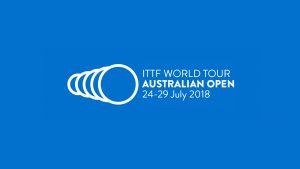 ITTF-Oceania is excited to announce that the Australian Open will be staged in Geelong, Victoria from the 24-29 July. As part of the ITTF World Tour, the Platinum Series event will see the world’s best athletes coming to Australia to compete for over 315,000USD in prize money.

The event will be an opportunity to promote table tennis and capture the public’s interest. The tournament will also increase the local competitive scene, providing a promising high performance environment for Oceania athletes.

“ITTF-Oceania is excited to host the ITTF World Tour platinum event, and provide opportunities for Oceania based athletes to participate in the competition against the best players in the world.” Christian Holtz, ITTF-Oceania Executive Director

The City of Geelong is enthusiastic about the prospect of hosting the event for the next three years.

“It’s great to have that continuity, it’ll build as the event grows over the three year period. We hope that the quality of the event grows and gives Geelong huge exposure in Asia and in other parts of the world.” Bruce Harwood, City of Greater Geelong Mayor

More than 150 athletes from around the world are expected to attend the five day event.