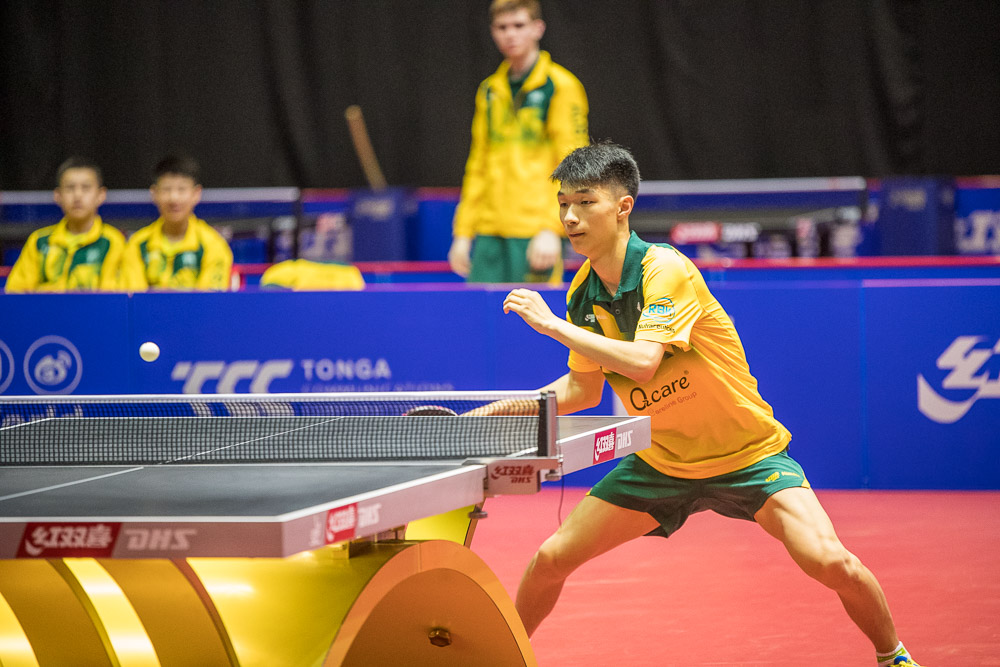 Australian Alex Lee has his eyes on Gold

It was a clean sweep for Australia in the team’s events at the 2019 ITTF Oceania Junior Championships. Coming away with gold medals in all four events, an already significant feat, all teams reached gold without dropping a single match.

In the Junior Girls Teams, the Aussies blasted their way to gold defeating New Zealand 3-0. It was an impressive display of teamwork for the girls, who only dropped one set throughout the team’s event.

“It’s a nice feeling to beat New Zealand in the final of the teams event. Coming into the event our goal as a team was to qualify for the World Junior Championships so we are happy to be able to achieve that” Matilda Alexandersson, Australian athlete

Meanwhile, in the Junior Boys Teams, Alex Lee from Australia made his Oceania debut in style. Lee cruised through his earlier teams matches and defeated Sang-Yong Park of New Zealand 3-0 in the first match of the finals giving his team a head start.  After this match, Finn Luu defeated New Zealand star Nathan Xu 3-1 in an enthralling game and Nicholas Lum sealed the deal for the Aussies, beating Max Henderson 3-0.

Mirroring the Junior Teams events, the Australian Boys Cadet team overpowered New Zealand 3-0 to take the title. It was a smooth ride for Raymond Zhang and Isaiah Lee who swept past their opponents without dropping a single set.

In the Cadet Girls Teams, once again Australia proved too strong for New Zealand. Chermaine Quah and 10-year-old Connie Psihogios teamed up to create a dynamic duo and dominated the playing field.

The Tonga Cadet Girls team was on the brink of causing an upset on Day 1 of the Oceania Junior Champs. The team of put up a tough fight, playing their best on home turf in a closely fought match against Cook Islands. However, they were ultimately unsuccessful and went down 2-3. The Cook Islands team went on the play Fiji where they challenged their much more experienced opponents but lost 3-0 in the bronze medal match.

Posted by ITTF-Oceania on Thursday, 8 August 2019

As the winners of the Junior Teams Events, both the Australian Girls and Boys teams will be heading to Bangkok, Thailand for the 2019 World Junior Championships in November.

“A major goal from the start of the season was that we should be in best shape at the Oceania Junior Championships with teams event being a priority.  The junior boys and girls knew the importance of securing a spot at WJC. They prepared well in the lead-up and we had good team camp in Melbourne last month. How they took on the challenge was great as we knew it would be tough against New Zealand. To come away with wins 3-0 in both events shows how far we’ve come and how hard both teams fought.”

The cadet teams events meant just as much to the Australians.

“To win both cadet titles on top of the junior titles is great for Australia as we are trying to build a good culture amongst the young players and I think some of the work we have been doing back home paid off here.” John Murphy, Australian head coach

With teams matches coming to an end, and singles events starting up, the next few days will certainly be packed to the brim with action. Make sure you stay tuned in as athletes contest for the prestigious Oceania titles as well as a chance to be on the Oceania Cadet Team for the World Cadet Challenge to be held in Poland later this year.